Born in 1964, entrepreneur, married with three children, he distinguishes himself since an early age in the Christian inspired associationism by fostering different economic activities of social and mutualistic solidarity in the fields of the house, formation, assistance and by presiding over different co-operative companies and enterprise associations in Brianza and Milan.

From 2000 to 2003 he was Councillor of the Lombardy Region for General Affairs, Security, Local Police, Personnel and State Property.

Sub-commissioner of the Government for the emergency related to the restoration of the Pirelli Tower – headquarters of the Lombardy Region – after the plane crash that occurred in 2002, he stood out for his efficiency in reconstruction. Subsequently, he  became a member of the Administrative of Board of Infrastrutture Lombarde Spa.

In 2008, he was awarded the title of Knight of the Republic.
In 2018, he was elected in the Congress of Deputies for the right-center coalition in the 9th single-member constituency of Milan/Sesto.

Real Estate and housebuilding have always been, since its inception, one of the main GDF Group businesses. Numerous residential properties were built in the decade of the 90s. Since 1999, the gained housebuilding experience enabled the company to undertake activities of acquisition and reconstruction of big properties, intended for healthcare and hoteliers and then directly operated by the group itself. In 2008, the former renowned Pirelli test track area(Area Prove Pirelli) in Lainate was acquired. Due to an important urbanists restructuring (PII) undertaken by the Group, a 120 rooms hotel operated by the group itself and IBIS brand, plus commercial and tertiary premises of over 20.000 sq. m were realized. In 2011, the Milano Affori FN was acquired by FNM (Ferrovie Nord Mi). Due to a long-term building transformation concluded in 2017, The Group builds 12.000 sq. m of residences up to 128 apartments, completed and delivered in 2019, as well as a  building of 178 apartments of over 19.000 sq. m with delivery in 2022 is in the implementation phase.

In 1999, Guido Della Frera acquired an important property located in Cinisello Balsamo and due to the building reconstruction, he realized the Polo Geriatrico Riabilitativo (Geriatric Rehabilitation Hub), a 195 beds reality operative in the regional social healthcare sector. He then built a second reality of more than 200 beds in Via San Faustino, Milan, in 2002. In Cinisello Balsamo will rise a 109 beds RSA (Residenza Sanitaria Assistenziale) for the elderly and a 86 beds rehabilitation.

There are 2 RSAs for the elderly with 192 beds in Milan. It also presents an Alzheimer’s center. The “Beati Coniugi Martin” Hospice was launched in 2014. A facility of 12 single beds, dedicated to the hospitalization of patients 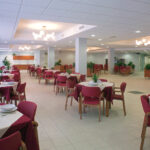 with terminal diseases, who require palliative treatments and interventions aimed to alleviate physical, psychological, social and spiritual distress. In the following years, the sanitary sector has developed with the creation of the Lombardy Dialysis Hub, a dialysis center aimed to supply the substitutive physical therapy of renal function.

In 2016, the company was sold to a primary group, leader for the direct care of patients on dialysis in Italy. In 2015, the facilities will become part of the KOS group (Residenze Anni Azzurri) and will be entirely operated by PGR, an Onlus social co-operative company chaired by Guido Della Frera, as evidence and continuity of the longtime social commitment. In 2019, the PGR Cooperativa Sociale hands over the entire healthcare activity to the real estate.

TOURIST AND HOTEL SECTOR
(2006 TO TODAY) 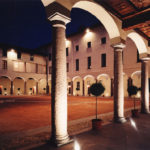 In 2006, GDF Groups Spa will acquire GRAND HOTEL VILLA TORRETTA, the 1600’s majestic aristocratic villa, rich in frescoes, art and culture, admirably restored and relaunched over an international standing of elevated hospitality. The facility has been recognized in the tourism business sector as “the best spaces for meeting and events of Northern Italy (IMA 2016 award) and “best MICE location” (2016 BEA award). Subsequently, It will become part of the Hilton world in franchising with the Curio Collection brand in 2019

In 2019 Gdf Group spa will acquire the real estate property. In 2015, was established the HOTEL CRISTALLO SRL which operates the eponymous hotel located in Ponte di Legno (Brescia). DoubleTree by Hilton in Brescia –  4 stars. The property of ownership was completely reconstructed by Gdf Group and inaugurated in January 2020.

The Guido Della Frera Group SPA has always been sensible, careful and proactive to dialogue with the local community and the Institutions in the belief of being the relational center and driving force for new ideas and an efficient future ideation space. In 2015, the AtenaImpresa Sociale Srl was established – A company in which Guido Della Frera is president. The company suggests the innovative educational proposal of the iconic “Leone Dehon” Institute of Monza with the following courses: classic high school, Human sciences high school, professional institute for socio-sanitary services and a four-year international high school. Website:  www.istitutoleonedehon.it

In 2018, Guido Della Frera renovated and opened the new Tennis Club of Barlassina, built in the 60s and owned by the Milanese Curia. Due to the transfer of the surface rights for 30 years by the Curia to another company, it was decided that the area had to be renovated in order to be reused, just as it was in the past, namely: prestigious fields available to citizens and all those who wanted to play tennis in general. The facility offers specific training and leisure activities for all game and age levels, aiming to increase general interest for tennis formation.

Equilibria is an activity at Barlassina Tennis Club opened in the early months of 2020, aiming at the completion of the sporting option associated with physical and mental wellness. The activity offers customized programs, targeted to people of all ages, for the accomplishment of health and wellness goals. The services offered are osteopathy, physiotherapy. tecartherapy, pilates, nutrition and mental coaching.